Here we present an example of a Change Dashboard. This Dashboard was created by a change team from a community college who participated in the ASCN Systemic Change Institute in 2017. Their goal was to expand the availability of course-based undergraduate student research experiences at their institution in the natural and social sciences.

Jump down to: Creating the Dashboard | After the Institute

Members of this project team had been involved in the pilot for a large grant, which introduced this project in 2012. In 2014 they entered a partnership with a local state university, which led the Dean of Science, Technology, Engineering and Mathematics (STEM) and a biology professor to create the project team. In 2016, these faculty attended workshops on the Course-Based Undergraduate Research Experience (CURE). As of 2017 they had established four CURE courses, which the administration supported as examples of real-world learning that will help persistence.

The team was made up of faculty and administrators with varied backgrounds and levels of influence at the institution. Members included the Dean of STEM, the head of the Chemistry Department (and liaison for the partnership with the local state university), an English professor (and assessment liaison), the Dean of Social Sciences and Fine Arts, and five professors (in biology, chemistry, psychology, and anthropology) with connections to the state university partnership and the CURE courses.

The project is part of the larger academic master plan at the institution (2016-2021) to address the current situation that graduates do not demonstrate all of the skills expected of them upon degree completion. For this team, they were concerned that only 33% of their graduates in the natural sciences could demonstrate the outcome, "apply a method of scientific inquiry, valid to the natural sciences, to evaluate claims about the natural world." 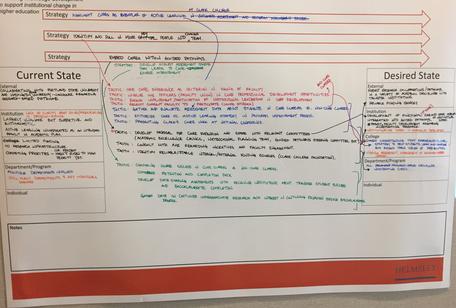 ×
Figure 5: Case study team dashboard
Five team members attended the Systemic Change Institute in 2017: the Dean of STEM, the head of the Chemistry Department, the English professor, the Dean of Social Sciences and Fine Arts, and a biology professor. They also returned for the 2018 institute.

Their goal was to develop policies and procedures to expand awareness about and interest in CUREs, as well as motivation for instructors to use CUREs. In their application they stated that their institution was in the midst of big changes, and they had an opportunity to lead this change from the sciences, with a model (CUREs) that other academic disciplines could use.

During the 2017 institute the team identified the Current and Desired States shown in Tables 2-4. For the Desired and Current States, note that they did not address the individual level. Their project required buy-in from more faculty as they encouraged adoption of the CURE model, and this remains unaddressed on their Dashboard. However, while their Desired State items are closer to goals than outcomes in many instances, they do cover a wide range of issues at their institution. For example, they address the lack of a research culture and the issue of shared vision, but without a clear description of what conditions will have changed to reach these goals.

Because the team wanted to spread the use of a specific (prescribed) course model involving CUREs, they chose a change strategy in the policy quadrant (specifically Kotter's 8 stage model). They identified many tactics, as can be seen in Figure 5 and in Table 4. Some of these tactics could also have been listed as outcomes under Desired State (e.g., "have CURE experience as criterion in hiring of faculty"). Overall, their tactics address many of the gaps between their Current and Desired States, as they organized them according to different aspects of their overall strategy. This allowed them to also address different quadrants in the foursquare, though they did not list them according to the quadrants explicitly (examples taken from Table 4):

We interviewed two of the team members after their participation in the 2018 Institute. They have grown their team to about 15 faculty and administrators who are involved in the CURE courses. They have also begun to look into expanding their CURE model statewide, through their state board of community colleges and possible grant funding.

These two team members reported that the institute allowed them to "coalesce and focus" their collaboration within the college and expand the program on the campus more quickly. They attributed this to the support of their mentor, which is part of the Institute, and the time they spent working on their vision statement and the Dashboard, which provided the framework they needed to move forward. In fact, one member stated that he kept the elements of the Dashboard in mind as they developed and grew the project on their campus. While they did not return to the Dashboard to revise it, their project used the Dashboard as the foundation for their activities.