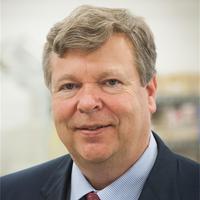 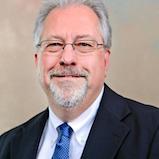 We present a simple model for efforts to change, within an institution of higher education, the degree of belief individuals hold for an idea related to teaching, learning, or curricular change, such as "student learning is enhanced through the use of evidence-based active learning pedagogies." A change in individual beliefs is assumed to be necessary for any sustainable educational change effort. The model is based on four assumptions about an individual's belief level about pedagogical/curricular change: 1) Without support from administrators, individual beliefs generally decay over time; 2) Top-down communications slowly cause an intended change in beliefs; 3) Interaction with key advocates of the change effort are also weakly impactful, 4) Interactions with other independent individuals also have an impact. In the case of (3) and (4), the interactions are with randomly selected individuals, and the shift of an individual's belief is toward that of the individual with whom they interact, but with a non-linear impact characteristic.

In the absence of change efforts, such a system is stable in one of two states - one with most individuals having a strongly positive belief about an intended pedagogical/curricular change (with the change likely to occur and be sustained), and the other, with a strongly negative average belief (with the change likely not to occur or be sustained). Efforts to move from the latter case to the former case usually fail.

Our model demonstrates that applying effect (2) alone is seldom effective, and the same is true for applying effect (3) alone. However, when both are carried out simultaneously, they are synergistic and more likely to succeed. These results have useful implications for developing successful organizational change efforts.