Skip to Main ContentSkip to Navigation
Your Account
Author Profile

The theory of planned behavior explains individual behavior as resulting from intentions, which in turn are influenced by attitudes, subjective norms, and perceived behavioral control.
Jump down to: Example | Assumptions & Limitations | Related Theories | Original Publication | Other References 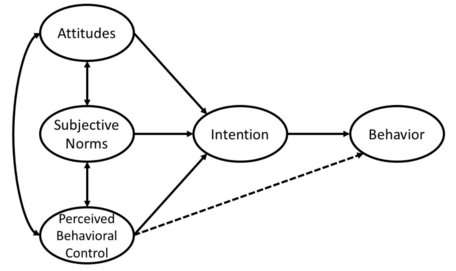 ×
Figure 1. The Theory of Planned Behavior model adapted from Ajzen 2005.
According to the theory of planned behavior (Ajzen, 1991), behaviors are influenced by intentions, which are determined by three factors: attitudes, subjective norms, and perceived behavioral control. It is also possible for external factors to directly force or prevent behaviors, regardless of the intention, depending on the degree to which a behavior is actually controlled by the individual, and the degree to which perceived behavioral control is an accurate measure of actual behavioral control. This relationship is shown with a dashed line in Figure 1.

Taking the example of adopting evidence-based instructional practices (EBIPs) as the desired behavior, we can define the factors as follows. Attitudes toward teaching and learning generally, and toward the use of EBIPs specifically, are both relevant in this context. Subjective norms can be considered social pressures, and include both the perceived expectations of others and how much the individual values those expectations. Students, colleagues, and administrators all have expectations about how STEM faculty teach, so there are relevant subjective norms for all three groups. Perceived behavioral control is how able an individual feels to perform a specific behavior, in their context. Thus, it includes both self-efficacy with the use of EBIPs, and external factors such as classroom environments, time, and resources. The more favorable the three factors are, the more likely the intention and action are to occur. Ajzen presents some data that support a claim that intention is more predictive of behavior than attitudes alone in Chapter 6 of his book (Ajzen, 2005).

The STEM Faculty Institute at Brigham Young University (NSF DUE-1712056) gathers volunteer faculty from among the three STEM colleges: Physical and Mathematical Sciences, Life Sciences, and Engineering and Technology to participate in a week-long summer workshop about EBIPs. Because we work exclusively with volunteers, we assume that their attitudes toward EBIPs are favorable. During the workshop, we help participants develop self-efficacy (perceived behavioral control) by teaching them how to use several different EBIPs, and giving them opportunities to practice facilitating those strategies with their peers. After the workshop, we help support positive subjective norms by providing ongoing mentoring and monthly cohort meetings for participants and mentors.

The Theory of Planned Behavior assumes that individuals act rationally, according to their attitudes, subjective norms, and perceived behavioral control. These factors are not necessarily actively or consciously considered during decision-making, but form the backdrop for the decision-making process. In other words, people may not articulate a particular attitude, but it may nonetheless influence their decision-making. Research in this area aims to uncover these hidden values and ideas that influence decision-making. There is some controversy about the assumption of rationality because sometimes humans act emotionally, not rationally. Rather than saying humans behave rationally, some researchers call this "sense-making".

Ajzen, I. (1991). The Theory of Planned Behavior. Organizational Behavior and Human Decision Processes,50, 179–211. [This is the original paper describing the theory, but it can be a little bit difficult to understand, which is why I also recommend the related book (Ajzen, 2005).]

Ajzen, I. (2005). Attitudes, Personality, and Behavior (2nd ed.). New York: Open University Press. [This book is a detailed development of this theory, and all of its components, along with information about the theory of reasoned action. Chapter 6 explains both theories in detail.]

Fishbein, M., & Ajzen, I. (1977). Belief, attitude, intention, and behavior: An introduction to theory and research. Addison-Wesley.

Note: This summary is written as a secondary resource to help researchers and practitioners learn about potentially relevant change theory. We encourage authors to read the original references rather than citing this summary in published work or grant proposals.